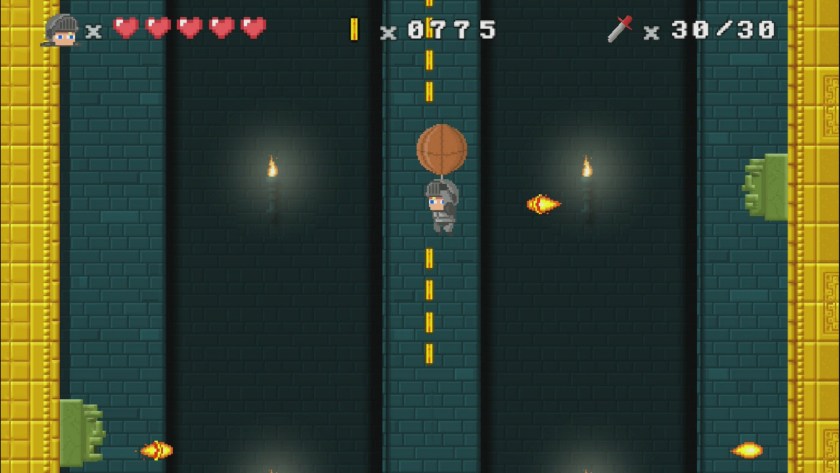 Kingdom Of Arcadia is a simple, everyday action-platformer with a fantastic design. A game with retro-graphics in which you play as a boy armed with a sword. You run through castle-like levels, hitting enemies with the sword and trying not to go crazy when you fall into a prickly pit. Is there anything new? We’ll find out.

You know, sometimes going through your father’s stuff isn’t such a good idea. Maybe you’ll find that old stamp collection, that old magazine you wish you’d never seen, or maybe some old dart trophies. In the case of young Sams, he finds his father’s old slot machine. I mean, it’s a slot machine, why not just plug it in and play?

Unfortunately for Sam, this is not the most fun Pac-Man game he could have expected. Instead, he entered the game as a pixelated adventure hero. To get home, he must save Arcadia by collecting various magic sticks in the typical fantasy game setting. The premise is pretty funny, and between zones Sam makes witty comments about how the wizards are doing and reminisces about his experiences in the levels and the bosses he’s had to deal with.

This is what happens when you play too many video games. 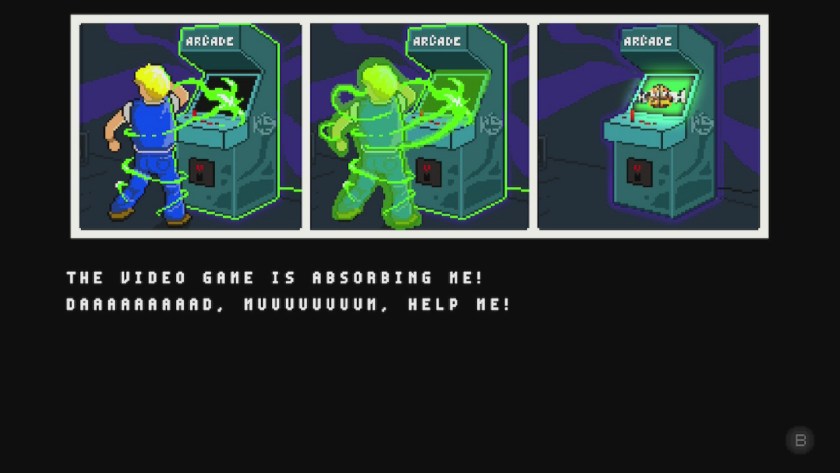 Attack on the castle

The game is a 2D platform and action game. Just complete each of the five levels in the world and end it with a boss fight. Sam can jump and use his sword to take out the bad guys. You also have a limited number of projectiles at your disposal, which are especially useful against enemies on the other side of the room. The levels are of a decent size and leave some room for exploration, you can search for treasure chests and secret rooms behind cracked walls. Coins are often found there, which can be spent in a shop accessible between levels or after death. You can upgrade your armor for more health, your sword and your projectile for more damage. The update will also change Sam’s cosmetic appearance, which is always nice. When you die, you actually keep all the coins you collected. If you find the game a bit difficult, you can earn more coins by defeating enemies to make the experience more manageable. 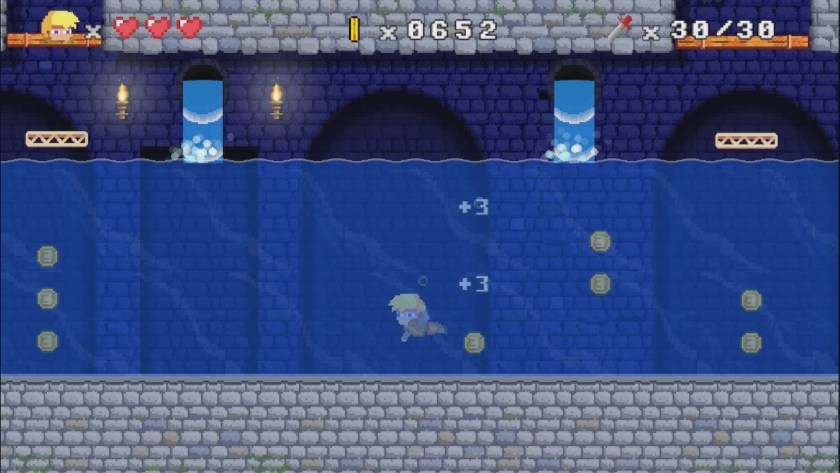 The game is quite prone to moments of frustration. He doesn’t shy away from making you dodge tricky hazards, like moving spikes, while dodging enemy projectiles across the room. Battles with bosses are more like battles with living animals, where you have to remember their habits and find the right moment to strike. I found it very annoying because the window to dodge some of their projectiles was quite small. So if you are prone to gambling mania, you have been warned.

Sometimes the game changes things up a bit by using a balloon to reach higher ground or driving a mining cart, but for the most part you’re content to explore the maze-like levels by hitting objects with your sword.

Freeze it to the bone!

The graphics are of a typical retro design. Sam has such a deranged, yet charming look. He is, after all, a bit of a time bomb. The castles you explore are typical video game settings, such as the ice zone, the sand zone and the green zone. It doesn’t really feel like an arcade game, given the premise of the game. Too bad, a greater respect for this style of play would have been nice. The graphics are decent and the soundtrack is of good quality. 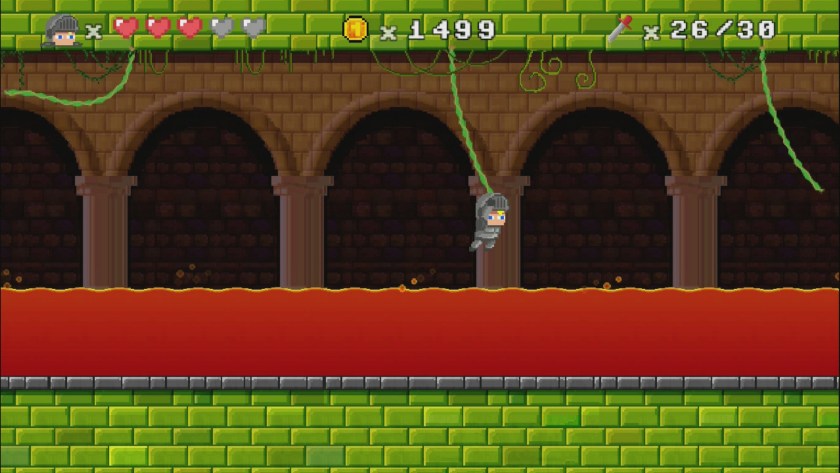 The controls are also very good. Sam has that bouncy animation where he jumps around and the sword play tends towards the crush button territory, especially with bosses, because crushing doesn’t help the health bar drain just a little faster. Performance was excellent in both TV and manual modes. I encountered a bug when I went back to reading levels. There was an elevator that had decided to stay on the first floor and not go up. But restarting the level (with all my gold intact) turned out to be a solution. 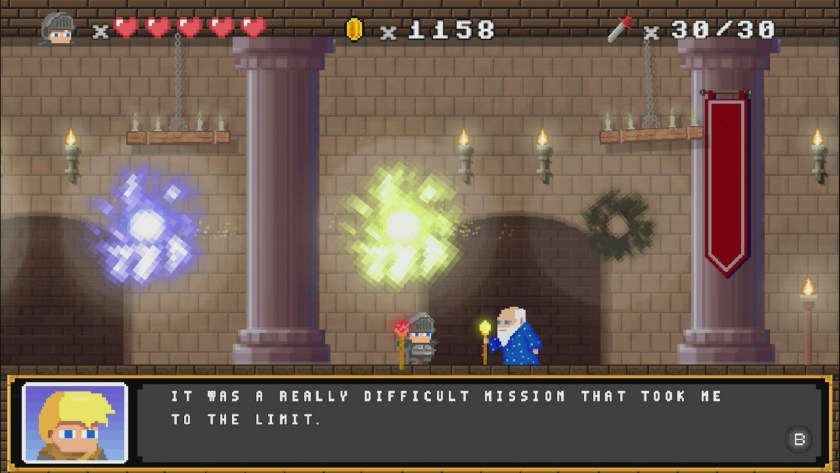 Kingdom of Arcadia will probably take about five hours in total to play out. In each level there is a hidden monster to be found. The game gives you a bronze medal if you reach 100%. To get the silver and gold, you have to play again. For me, it didn’t really encourage me to procreate. Again, with the game room, it seems like something classy would fit in here.

I found this game more enjoyable in short 30 minute periods, as playing too long becomes too frustrating. Sometimes you just have to leave to fight another day.

Doesn’t that sound like a fair fight to you? 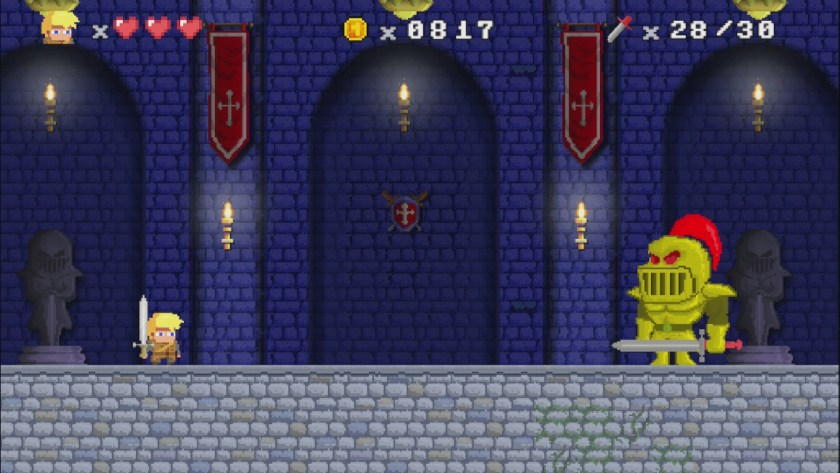 Kingdom of Arcadia is not the most original platformer. It’s a simple formula that has been used before and adds nothing new to the action platform genre. It’s not bad, but it’s not great either. It plays very well and the price is very attractive. Just what you need to pass the time or maybe a nice gift for a friend who needs a boost.

It would have been nice to add more depth to the formula, but if the game taught me one thing, it’s that you really shouldn’t spy in your dad’s garage.

How do you load…